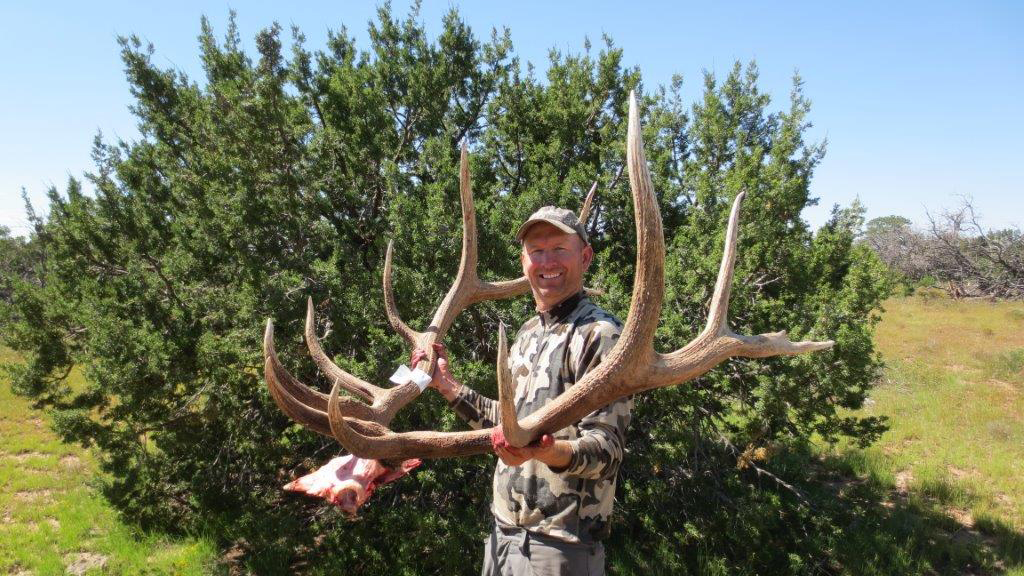 There are several ways to field judge elk: one is to "air judge" and the other is to actually estimate each measurement; mass, inside spread, point & main beam length.  Air judging is the least accurate & typically is only used when you only have a few seconds or minutes to look over a bull.  Estimating a bull's measurements allows you to really break down a bull, to insure you are as accurate as you can be.

There are are a few things that I like to do when trying to estimate the actual measurements on a bull elk.  First, I use anatomical references to estimate several of the point lengths.  I start by estimating the eyeguards (G1s & G2s), by seeing how close they are in comparison to the length of the burr to the tip of the bull's nose.  If the first two points on each side follow parallel with the nose and tip up just at the end of the nose, they should be right around 16 inches.  Beware of straight looking points because they are often shorter than you think.  Long eyeguards will follow the nose and then curl or bend upwards (look for at least 4 inches of curl for a 20 inch eyeguard).  Once I determine the length of the first two points, I then extrapolate those into the rest of the points.  The 3rd points (G3s) are often the source of a bull's weakness; again look for a lot of curve.

Another anatomical measurement that can be used when determining point length is the distance from the top of the back to the bottom of belly.  That measurement is generally 30 inches.  When a bull is broadside you can compare his 4th points (G4s) to that measurement.  If the point is 10 inches shorter, then the bull probably has a 20 inch G4.  Once you estimate the length of the 4th points, move on to the 5th points (G5s) and compare them with the 4th points.  If they look about 6 inches shorter than the G4s, the bull has about 14 inch 5th points.

Next, I estimate the length of the main beams by using an important anatomical measurement.  When a bull has his head down feeding, I determine whether the main beam is higher or lower than the hump on his back above his shoulder.  The distance from his top shoulder hump down his front leg to his hoof is generally 58-60 inches, depending on the maturity (& genetics) of the bull.  If the tip of the main beam comes to the top of the hump then the beam is probably around 50 inches.  If it is shorter or longer than the hump on the back, I add or subtract inches accordingly.

Determining the 4 mass measurements per side is usually difficult, so I use a rule of thumb.  If the rack doesn't look heavy and has a thin appearance, I attribute 27 inches of mass per side or 54 inches total.  If a bull looks really heavy and solid, then I estimate about 30 inches of mass per side.  Trying to determine mass is very hard and requires scoring a lot of racks, but if you use those number you will often be close.

There is quite a bit of "air judging" that gets done while estimating measurements, but if you use anatomical references, you can often get pretty close to the real measurements.  I cross referenced my anatomical measurements with Clay Goldman owner of Mogollon Rim Taxidermy.  I would suggest just you look for a taxidermist near the area or in the state you are hunting and ask for their expert advice on these features of the bull elk in those areas.

There is a great shortcut for field judging bulls where I use anatomical references, but instead of trying to estimate each measurement individually, I use a magic number for the main beam length, mass, and inside spread, and then I compare the length of the points from onside to the other and estimate shortest points (ESP).  This method is not quite as exact as estimating each measurement, but it gets you very close and it's much quicker and easier.

First, I will start with the magic number of 200. For a mature typical bull elk that scores around 350 inches, his main beam length is usually around 50 inches per side x2 sides= 100 inches, his mass usually equals 30 inches per side x2 sides= 60 inches, and inside spread is usually around 40 inches, so 100+60+40=200.  Next, I estimate the length of the shortest point for each antler, double it, and then add them up.  Be careful with these estimates because whenever you double a measurement, it can make your score go up or down drastically.  Do your best not to over estimate your shortest points. Now add the total length of points to the magic number of 200 to get the gross score.  Finally, go back to the main beam, mass and inside spread in order to further review. Is the main beam really 50 or is it 53 inches?  Is the mass heavy or light?  Is the bull really 40 inches inside or is he 36 inches?  If you think those measurements deviate from the magic number, just add or subtract the differences accordingly. 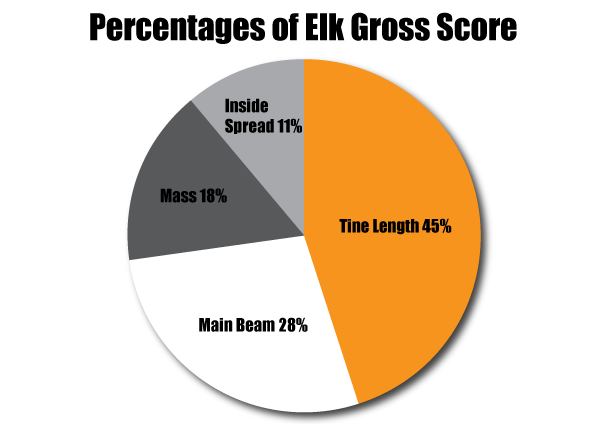 Field judging elk is an art, while scoring a dead elk is a science.  One of the best ways to improve your field judging skills is to practice field judging bulls before measuring them.  Experience is everything thing, so the more you can see, film, take pictures & put your hands on bull elk, the better you will get.

I hope these tips, videos & diagrams come in handy when you are trying to field judge bulls, but PLEASE remember, it's more important to measure your hunt success by the memories and quality experiences gained, rather than in just inches.

Listen to 2 Episodes of the Podcast on Field Judging Elk :

Previous Next
Close
Test Caption
Test Description goes like this